Herman Cain for President in 2012!

It is about time a candidate for President talk honestly and open and directly to the heart of problems. We would truly be a blessed nation if Cain was able to secure the Office of President. I believe that he could heal the past racism due to our history of slavery, lack of black citizen rights in the 60s, and current economic differences between whites and blacks. What a true American hero, who is ready to stand up and fight for America and American values. God Bless Herman Cain!
Posted by Will at 10/12/2011 12:26:00 AM

One never wants to trample someone who is deceased, however, I do like TRUTH. I like truth even if it hurts you. Not many people do, and most run and hide from the truth, especially if it condemns them to improper behavior. In this article from Gawker.com, authored by Ryan Tate, we see deep inside the real Apple computer, and we wonder how this kind of behavior and treatment of individuals can be allowed to happen in the first place.

Before he was deposed from Apple the first time around, Jobs already had a reputation internally for acting like a tyrant. Jobs regularly belittled people, swore at them, and pressured them until they reached their breaking point. In the pursuit of greatness he cast aside politeness and empathy. His verbal abuse never stopped.

Jobs had his share of personal shortcomings, too. He has no public record of giving to charity over the years, despite the fact he became wealthy after Apple's 1980 IPO and had accumulated an estimated $7 billion net worth by the time of his death. After closing Apple's philanthropic programs on his return to Apple in 1997, he never reinstated them, despite the company's gusher of profits.

Steve Jobs created many beautiful objects. He made digital devices more elegant and easier to use. He made a lot of money for Apple Inc. after people wrote it off for dead. He will undoubtedly serve as a role model for generations of entrepreneurs and business leaders. Whether that's a good thing or a bad thing depends on how honestly his life is appraised.

The truth is always better than fiction! Read on! 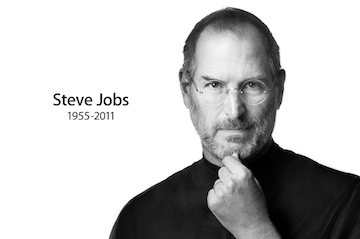 Apple founder Steve Jobs has passed away. Many tributes are going out to him, and no wonder. Steve Jobs is the ultimate American entrepreneur. He is truly a model by which we should all admire. He founded a company with bold ideas, and little money. He worked very hard to climb the ladder, creating products and a company that even in hard times, makes huge profits. He created a company that provides products that an entire industry copies. He did it all his way, regardless of nay sayers. Even while he was very sick, he worked hard, and continued to lead a company that has gotten better, larger, yet more nimble, and at the same time more financially secure. Even though he was loved by liberals, his ideas were hardly even close to liberal idealism. Liberals believe that everyone else owes them something, but Steve Jobs didn't buy that nonsense, he knew you had to reach for what you wanted, work hard, and never say never. He was a true conservative, a real modern American! Steve, thanks for making computing fun, and bringing multimedia to our fingertips.
Posted by Will at 10/06/2011 11:50:00 PM

I'm encouraging like-minded citizens like you to take a stand
against those elected officials who are complicit in...
the trampling of our liberties,
the undermining of our religious freedoms,
the overt and intentional subversion of our Constitution,
overstepping the boundaries of their law-based authority,
the advancement and promotion of a socialist agenda,
the massive expansion of a federal government through agencies
and czars whose goal is to "fundamentally transform America!"

There is no obligation to participate. Please join me.
Go here to sign:

Email ThisBlogThis!Share to TwitterShare to FacebookShare to Pinterest
Labels: Declaration of Liberty 2011, Liberty Council, US Constitution

It just came to my attention that Hollywood, namely Paramount Pictures, has decided to remake Footloose. This is the classic movie that stars Kevin Bacon as a city slicker who moves to a small town, to face a sad fact that dancing is illegal. He fights to legalize the dancing, and tries to convince civic leaders why they should side with him. This was a great feel good movie. I left the theater wanted to dance (that says alot for me who has 2 left feet). So Paramount decides to remake the old movie, with new characters and similar if not exact same old story. I ask why? Can't Paramount come up with any new material? Why remake old movies into new movies? I know it is dollars, but this strategy won't last for long. Why not just take the old original movie and re-release it, saving production time and schedules. They could digitize the old movie, clean it up, and re-release it. Just seems silly to me to redo everything. Come on Hollywood come up with some original ideas. You could remake Wizard of OZ (yet again) and use the great special effects from George Lucas.

I just signed a petition standing with the Tea Party against the Left's hostile attacks. The Left has resorted to calling the Tea Party "terrorists" and calling for Tea Party "SOBs" to be "taken out." But in reality the "Tea Party" is you and me -- ordinary Americans who want our liberties restored.

I'm staking a stand to oppose such attacks. Please go here to sign your petition and request your free "I Am The Tea Party" key ring tag: